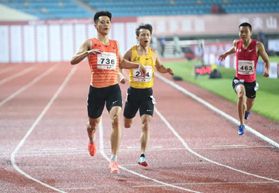 Spotlight focused on men's 110m hurdles race. As soon as the gun went off, Zeng Jianhang took the lead while Asian champion Xie Wenjun fell behind half a body-length. Xie pulled away after two hurdles, extending his lead to 0.3 seconds at the finishing line.

"The results (13.24s) is very close to my personal best. In coming winter training, I will try to improve my starting skill," said 30-year-old Xie.

In men's 10,000m, another veteran Dong Guojian took the lead with ten laps to go, he secured the victory with 29:35.46, five seconds faster than the runner-up Zhao Changhong. "We were not in our best condition after months of imperfect system of training, I just give all out," said 33-year-old Dong.

World champion Wang Yu was considered as the top favorite in Chinese high jump, but he failed to conquer 2.24m three times on Wedensday, yet Li Jialun clear the bar in his second attempt.

"It was definitely not a satisfying result, but it was the best I ever achieved on rainy days. Younger generation like Li Jialun and Chen Long could be promising stars in the future," said Wang.

Guo Sijia leaped to 6.48m in her second attempt and claimed the title of women's long jump, while Qin Huiling ended up with the second place with only one centimeter short. Women's shot put saw Gao Yang claim the title with 17.89m, Wang Shizhu ruled men's hammer throw with 71.89m.